Breaking Up Is Hard To Do

What the hell is with these reality shows? "Breaking up with Shannon Dougherty"?!

Okay, so I was bored and left the tv on while I did some stuff around the house. Plus I was curious. Please, America, tell me - why is this show on? What the hell is wrong with people!?

Here's the premise, in case you don't know. Shannon "Jobless" Dougherty is the "hostess" of a show where she'll break up with someone for you. It could be your bf/gf, it could be a friend you don't want to be around anymore. The point is, she'll gladly do your dirty work for you.

How spineless do you have to be to get on this show? If you're willing to go through the effort of contacting the show, setting up the "sting", and going on national television...just break up with him/her, and get it over with!!

Seriously folks, I'm calling bullshit on this one. This one girl, she decided she'd had enough of her slacker no-goal boyfriend. She's on the up and up, ready to take on the world, and she's tired of his Shaggy-imitatin', scooby-snak eating worthless ass. Okay I'm with that, no problem.

So why drag him on television to humiliate him in public? Lemme ask you this, chicky - if you looooooooove him so much, if he's otherwise a good person who you want to keep as a friend...then why the fuck would you set him up on a tv show so all his friends can see what a drop-kicked loser he is? How cruel do you have to be, to do that to someone you claim to care about but just don't want to be together with anymore?

Holy shit. Not to say some of these people don't deserve it, like the "playah" whose girlfriend lived in a different city and he was stepping out on her with another girl, who incidently he was living with. The guy blew off being dumped, pretty much admitting it's all a game to him, even hitting on Shannon AFTER his gf left crying. Total jackass, right?

But let's go back to the beginning of the show, when the girl was asked why she's doing this on television instead of doing it herself. Her answer?

Sorry babe, but somehow I'm just not feeling sorry for you.

Someone cancel this show. Please.
Posted by Ariq the Moor at 10:41 PM No comments:

Stephon Marbury, pseudo point guard for the New York Knicks, has created his own line of shoes that caters to the underprivaledged youth of America's slums. His line of Starbury One shoes are available exclusively at "Steve & Barry's" (never heard of them) nationwide. They're going to cost - get this - $14.98 a pair. It doesn't get any cheaper than that, folks, and he swears the quality is so good he plans on wearing them on the court himself.

Now...in theory...this is a great sentiment. It's a goddamn shame that athletes (*coughJordancough*) force kids to somehow fork over $150 for a pair of shoes that they damn well know will fade out of style the next summer, especially since it's that same athlete who's coming out with a new model for them to buy. Fuckers.

But this is Starbury, the man himself. So I'm a little jaded.

I can't help but wonder - could it be that he's wearing his own brand of shoes because no other shoe manufacturer wants to be associated with him anymore?

And are they priced under $15 because all the stores still have overstock on his $89 shoes from last year?

Nothing personal, Stephon. But I ain't buying it.
Posted by Ariq the Moor at 4:14 PM No comments:

So I'm thinking of buying a boat.

No, not a raft or a dinghy. A boat. It's been hovering in the back of my mind for a while now, but lately it's been coming more and more to the forefront. See, I'm not just thinking of buying some recreational craft.

I'm thinking of buying a houseboat. Specifically a 50' Catamaran Cruiser, a powered catamaran with full living facilities. There's something incredibly appealing about moving off land, onto the water. Never mind that I'll still be near land, since I'll be berthed at a marina.

It's...hmm. I'm not one to buy a house, dig in those roots, plant myself. I hate feeling land-locked, stuck in one place. Even if I have a family, I'd still want the feeling that I could pack up and move tomorrow if I wanted to, no matter how impractical. Buying a home seems to imply, "this is where I want to die". That's how I feel, I'm not saying others do.

A houseboat is my escape from that. It combines the freedom of being able to move where I want to (even if it takes me forever to get there, with the limited 150hp yamaha outboard engine) with owning your own home, that sense of accomplishment.

Of course, it's still out of range for me currently. I just can't afford the $25k I'd need to put down on it. Yet.

But it's a goal. And it's nice to have something to reach for, isn't it?
Posted by Ariq the Moor at 1:59 AM No comments:

I've posted before about the android race taking place between Japan (Actroid) and Korea (Ever-1) ("I-Robot"). Well, put another shrimp on the barbie, because China refuses to be left eating their silicon-chip dust. 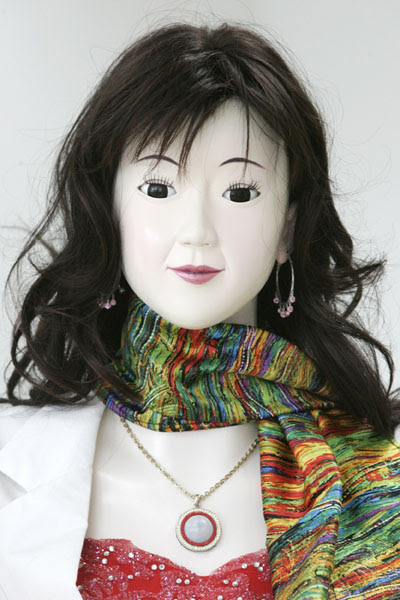 Meet China's "Rong Cheng", their newly created robot as she sits on display at the Institute of Automation of Chinese Academy of Sciences in Beijing. Rong Cheng, dubbed as the first Chinese "beauty" robot, is able to respond to some 1,000 Chinese words. She can dance, bow and greet people in the Sichuan dialect as she is destined for the Sichuan Science Museum to serve as a receptionist. The robot costs about 300,000 yuan (US$37,500) to make, according to Xinhua News.

Now...I thought the Korean robot was the definition of fugly, but holy egg foo yung batman, this 'bot is one scary creature! Seriously, is this some chinese engineer's definition of beauty? Kid, get outside more. The women in Beijing must be crying foul play right about now, if this is what's supposed to represent Chinese beauty in the scientific world. I keep expecting her to pop out from behind a door with a knife in her hand, like a Chinese Michael Myers. How do you whisper "kill kill kill kill" in Mandarin?
Posted by Ariq the Moor at 12:23 PM No comments:

It's Been A Long Time

Wow, it's been - what - almost two months since my last confess...I mean, since my last post! Things have just been a little chaotic, and somehow I managed not to find the time to come here and post my usual mental meanderings.

Blogging is, for me I think, therapeutic. It's just a way to help empty some of the random clutter that I often find filling my headspace, often to the point of overflowing. That's why, many times, this blog seems to have no specific theme. It does; it's a repository for my mental farts. And you, true believers, are the beneficiaries of those exhalations.

So what brought me back today, besides a desperate need for an excuse to post? Reminiscing. I was thinking back on a game that, unfortunately, never quite got off the launching pad. It was called Ilusia: Quest for the Eternals, and it still manages to hold a near and dear place in my heart.

The game was typical for it's time, back in the early-mid 90s when it began. This was an age when the text-based MUDs (multi-user dungeons), the precursor to today's MMO's, where all the rage. Illusia was going to spearhead a new frontier - the Graphical MUD. The concept was one of a divided realm - human-aligned races against vampire-aligned races. Dark vs. Light, Order vs. Chaos. And I was one of the early player-testers, once the game entered pre-Beta, back in...1994. "Kowh", the Minotaur, started out as a joke character; instead he became my mainstay, a standard. A Minotaur Knight, a member of the order House of Three Moons, eventually the torchbearer, and defacto leader of that group when the founding members left Illusia. Mhauz the Felzur followed, and he was my comic foil to Kowh's stoic resolve.

I believed in the game enough that I became a Charter Member, someone who aided in the development of the game by donating $150 of their cash in exchange for elevated testing status, and a "charter" package when the game finally went gold.

Well, it never did. The developers were scattered across the country, communicating by chat programs and email; all of them were doing this on a volunteer basis, while the head admin and owner of the site - "Randor" - bled money out of his pockets to support it. I eventually joined the ranks of the admin staff as Inktomi the Storyteller, trying to help pull the world's story together and give a solid basis for the "builders" to base their work off...but it was a hopeless task. Illusia's time had come and gone; Ultima Online and, eventually, Everquest, broke the mold on the concept of the graphical MUD and took it into completely new waters. The MUD was dead, the MMO was born.

Illusia finally died a quiet death sometime in the last few months. None of the links to the game sites work anymore, and the forums no longer seem to exist. It's a shame because it had developed, at it's peak around 2000-2001, a strong and loyal fan base who shared in the dream. I would have liked to see it go out with more fanfare...or maybe it did happen, and I just missed it.

Still. I'm thinking of resurrecting it from the ashes, perhaps in another form. The tools are there, and I know the stories behind the world as if I created them myself (well...for a large part...I did!) Do I have the time, the drive, the energy?