Is Amazon Killing the Kindle?

Let's face it: ebooks, and more specifically digital book readers, are an incredibly niche market. Most people out there have little to no interest in them, because it's hard to fathom paying $250 or more for a device that does little more than display books.

Sure there are legitimate reasons why the technology is both expensive and limited, and those of us who have expressed a real interest in these devices understand and accept these reasons. However, for the average consumer - it just isn't good enough.

So with that in mind, is Amazon - unquestionably the market leader in this field - destroying it's own chances, in the mind of the general populace?

Amazon today introduced the third in it's Kindle line of digital book readers, the Kindle DX (for "deluxe"). 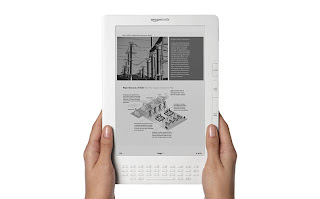 The DX boasts a larger screen (9.7", over the K1 and K2's 6" screen), larger internal memory (4G to the K1/2's 2G), auto-rotatable between landscape and portrait, and a larger footprint (roughly 7"x10"). And, finally (for Kindle users, anyway), native PDF support.

So what, exactly, is the problem I see here?

1) Amazon just released the Kindle 2 a few months ago. Their users have been crying for native PDF support, and after spending $370 for the K2 Amazon releases a new device, just a few short months later, with that very feature. For $489. Not cool, Amazon.

2) The appeal of the digital book readers - at least in my view - is it's portability. My Sony Reader fits comfortably in the pocket of my trenchcoat, which makes it easy for me to bring on my morning and evening commute to and from work. The K1 and K2, while slightly larger than the Sony models, both offer similar portability; my girlfriend carries her K2 in her purse. The KDX, by contrast, isn't designed for the average consumer; it's footprint is considerably larger, more in line with a standard letter-sized paper or notebook. You'd need to carry a briefcase, or backpack, to bring it with you.

And therein is where they market the device. This is being pushed at both the student market, and the newspaper crowd. The question is, will either really be interested in this device, at all?

I can absolutely see the initial appeal as a student. A single Kindle can carry the entire textbook load of that student's college life; never again would you need to lug around 40-50lbs of books between classes, when you can carry them all embedded on this singular device. That alone is a considerable bonus.

But is it enough? As a student, I was constantly making notes in the margins of my books, flagging pages for later review - and flipping back and forth between chapters, to refresh mental notes. The Kindle has limited capabilities to do this; will that sensation of "slowness" be a turnoff for a student?

Let's also talk about the resale value of a textbook. Every student I've ever known, has managed to recoup at least SOME of the cost of textbooks by reselling them at the end of each semester. With Amazon's DRM'd format, will this even be possible anymore? Judging by the price of ebooks now (and this is not limited to Amazon's ebook store), there is only a small discount (if any) from the price of a printed book; if that carries over to textbooks, will the cost of a nearly $500 ebook reader (etextbook reader?) be worth the cost, if the cost of electronic textbooks is not significantly lower?

That leaves the newspaper crowd, and this...boggles my mind. The KDX is being marketed as being able to display electronics newspapers in a more newspaper-like fashion, and the NYTimes has reduced its subscription cost from the $14.99 a month price to $9.99 on the Kindle - with, rumored, a 2yr obligation.

Here's my question, for the newspapers: why would I pay for something I can now read, online, for free?

Every single newspaper I read has updated their websites with RSS feeds. Thanks to aftermarket software, I can download those RSS feeds onto my digital reader and read, for free, the sections of the newspapers that most interest me.

So why would I want a large, unwieldy device to do this at an extra cost?

I understand that this is a hail mary pass by the newspaper industry, trying to find a way to bring the populace back to their pages. Newspaper readership is dying, and each year it gets worse as the new generations adapt to new technologies. In this green world we're living in, the idea of a daily paper seems wasteful when you can get the same news online.

Lastly: Amazon, very quietly, recently announced they were raising the cost of their personal document conversion service. In order to get, say, a PDF document onto a Kindle you have to email it to this service, which would then convert the document into a Kindle-friendly format and send it wirelessly to your device. This service used to cost a single dime, $.10 cents, regardless of the size of your document.

Now, that same service is raised to 15 cents - and that's 15 cents PER MEGABYTE, rounded up to the next megabyte. Which means the same document you used to send could now cost you as much as 50 cents to convert - small change, but a considerable price increase.

I honestly don't know what Amazon is thinking here. On one hand, yes their push into the student/textbook market makes a certain amount of sense - IF textbook publishers were already on board. Which they aren't. So Amazon is having a Field of Dreams moment; if they build it, they will come. They're marketing it as a newspaper reading device, but the reality is they're hoping the academic publishers will see the benefits of it and flock to digitize their textbooks - because that's where the real money will come from.

In the meantime, I'm waiting for Sony to announce their own wireless, touchscreen, Wacom-assisted next-generation reader with open-ended document support. And yes, I will be upgrading to it - while shaking my head at Amazon's self-destruction.