Riding the trains, sitting in coffee shops with my eReader...I get a lot of lookie-loos, and questions. People are curious about this thing I'm holding - is it a Kindle? Is it an audio book? A netbook? What the hell is this, and do I (meaning they) want one for myself?

So, having had a good month with the Sony - and having had the chance to spend a few days with the Kindle 1, and a hands-on with the Kindle 2 - I figure it'd probably be a good service to clarify just what it is about an eReader that may or may not appeal to you folks out there, based on the types of questions I get.

WHY BOTHER?
Seriously, why do I want/need a dedicated device just for books? I have a desktop, a laptop, a netbook, an iJesus phone...why would I spend $300-$400 on a device just to read books, when all of those other devices will let me read books on them as well? And do more for the price?

You're right, you can absolutely read books on any of those devices you've named, and more. Hell, I used to download ebooks onto my Palm device and read them on planes/trains. So why did I fork over the bucks for a dedicated reading device?

I spent a couple grand a few years ago to have Lasik surgery, after having spent most of my life wearing glasses. I would very much like to put off, for as long as possible, any eye damage that will naturally occur as old age begins to creep up on me.

Computer screens - LCD screens - while better than the old CRT screens, will (excuse my french) fuck your eyeballs up. Especially as much as we web junkies use them.

Come on; video games, web browsing, chat programs, spreadsheets, documents, text messages, smartphones. We probably spend 10-12 hours a day squinting at LCD screens of some kind. And I'm being conservative with that number. Here's part of a report put out on eye fatigue:

There are many different possible-contributing factors to eye problems related to computer use. They include:

- Using bifocals which are set for a typical reading distance of sixteen inches, and where computer monitors are usually further away than sixteen inches.
- The set distance of the computer monitor causing the worker to focus on one specific distance for a long period of time.
- The fact that information on a computer monitor is brightest in the middle then fades out, as it gets closer to the edge. This causes the eyes to overwork to compensate and can result in strain to the eyes.
- Prolonged use of the computer without adequate breaks, causing increased stress and strain to the eyes.
- Inadequate or improper placement and/or use of lighting. (glares too much or is too dark).

Isn't this just another LCD device, and won't it still damage your eyes?

See, the reason for the price on these readers isn't the newness of the devices - ebooks have been around the consumer market since the '90s, and ereaders have been available for a good 4-5 years now. No, the price is related to the technology being used: e-ink.

Readers such as the Kindle (which right now is the most popular, but I'll go into detail later about the different devices out there) DO NOT use LCD screens, and therefore cause considerably less eye strain on their own. There's no backlight, the screen technology is designed to be no more of a strain on the eyes than reading a paper book.

E-ink...in simplistic terms, is like looking at a very, very good Etch-A-Sketch. It rearranges a display of charged particles using an electrical field, essentially "pushing" the charged particles to the top of the special "paper" holding them and forming images based on what the electrical impulses tell them to do.

Think of it in terms of those old gimmick desk toys you'd seen, where you stuck your hand into an open block of thin, metal rods; the rods would push outward with your hand, and form a three-dimensional image of your hand with those rods. 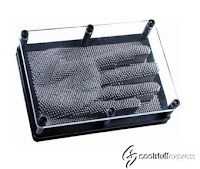 A very similar principal is at work here. The device electronically reads what the text is supposed to look like, and pushes the particles up to the top of the display sheet in the proper configuration where you can see it - in the form of text, or pictures. When you turn the page it wipes the board clean, and does it all again.

The advantages of this?

- no screen flicker on display;
- no glare from a lighted display;
- less reflection from ambient outside light;
- significant battery savings


How much does this save in battery life?

Like you can't imagine. An LCD screen draws on it's power supply to keep it active. An e-ink display...doesn't. Once the screen is drawn, it takes NO power to keep the image on the screen.

I've had my Sony for just about a month. I've charged it...twice. In that time I've read 11 full-length books and several newspaper RSS feeds. I use it DAILY, on my commute to and from work, and will sit and read on the weekends.

And I've charged it twice in that time. At neither time was it at the halfway mark for battery life.

If I didn't touch my phone AT ALL for the same amount of time, I'd come back and find it completely dead.

Let me tell you a story. Once upon a time, people looked at the iPod and thought: puh-leeze, this is just a $400 device to hold music. It had a mere monochrome 160 x 128 LCD, 32MB of RAM and 5G of storage. The iPod didn't know how to work with Windows, was FireWire-only at first, and only sold 125,000 units in its first two months. They didn't see its potential.

Ebook readers are in that stage of development. And they can already do so much more than people give them credit for. Don't think of this as a device to read a book with; think of it as a device to STORE your books. Your entire LIBRARY of books. Right now, with a mere 512mb storage card in it, my Sony reader has 80 books and 3 newspapers in storage. Understand that: 80 full-length books. That I can access at any time, anywhere I am. The devices have built-in mp3 capacity, so I could use it to listen to music while I read. It can store photos. Some have limited web browsing capability. Others have note-taking ability, touch-screen technology, dictionary lookups... Imagine if you had this, in college, instead of your backpack filled with 10lb books. You could carry an entire semester's textbook needs, in your coat pocket.

Granted, but: a black and white display? Seriously?

I say again: early stages of development. Color readers are out there, but because of the way the technology works it's cost-prohibitive for the consumer market. Right now. Give it a few years, you'll see that change - and it'll open up a whole new market for readers: magazines, graphic novels, comic books.

At the end of the day, it comes down to this: do you read a lot of books, whether for pleasure, work, or school? Do you read more than 2 books a month? Are you comfortable using technology?

If you can answer yes to these...then yes, an ereader is very likely something you'd like. And we'll chat more later on the specifics of what's out there, what their differences are, and where you can get books to download onto them.

If you've answered no, then let's face it - you're not really into books, are you? So this would be a total waste of your money. It's what a graphic tablet is to an artist; if you don't spend a lot of time doing computer art, what's the point of owning one?